Last week I did the reception for Jaime & Andy Lapham at Stonebridge Golf Course in Ann Arbor.  Stonebridge is on the higher end of the scale, though from the poor layout of the dance floor, you'd never know it.  The banquet room is laid out in an angled design, with a small dance floor shoe horned into one end (though not quite at the very end), putting guest tables in an awkward location and leaving almost no room for a DJ to setup.

The 4 foot wall extension serves no purpose other than to break up the continuity of the room and force the DJ to setup in a VERY limited position.  The banquet manager suggested that I setup on the other side of the useless wall and face a guest table, which was not only inappropriate due to speaker placement, but would have kept me from seeing the dance floor and reading the crowd. You'll also notice that the power cables are plugged in on the dance floor.  That's because there are no power outlets anywhere behind me, another major layout boo-boo.

Regardless of indoor layout issues, the venue was very nice looking and in pristine condition.  The outdoor ceremony was perfect and power was easily accessible there.  Both temperature and sunshine were made-to-order for this moment.

This was the third time I had been referred from a couple in this group.  I did the best man's wedding last year and also a friend of theirs.  It was nice to see some familiar faces and this group loves to have fun!  I should also mention that they are all among the nicest people I've worked with over the years.

A side note... the food was good, but one of the items served (pork tenderloin with apples), was not cooked.  Both the photographers and I agreed that it was undercooked (very pink in the middle) and chose not to eat it.  This should not have been the case as dinner was about 15 minutes behind schedule.  I would expect better from a venue of this scale, but the rest of the food was good.  Sorry no picture of the food this time as it blurred to the point that it could not be used.

The photo booth got a lot of use and guests signed their best wishes to the new couple in a photo strip scrapbook. Guests danced the whole night right to the very end and finished with a big circle to "Don't Stop Believin'"

Just a few days later, I received this very nice thank you card from the bride's parents. 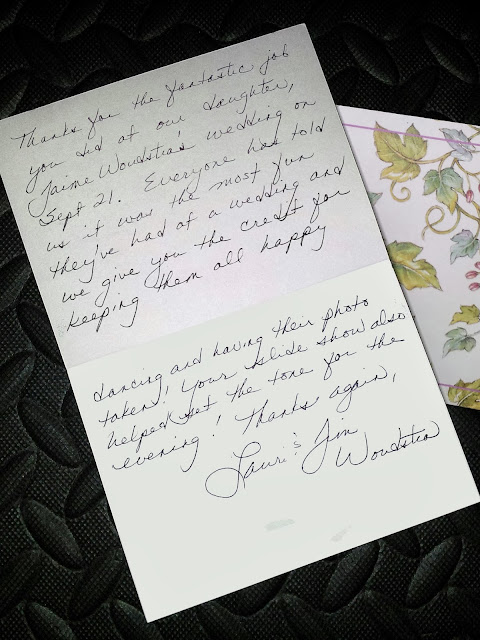 It's not very often that I get an older couple for a wedding reception. I do plenty of anniversary parties, but this past Saturday was different. The Swains got married a year ago down south and had a wedding reception for her side of the family. They did it again this past weekend for his family and I had the opportunity to DJ their reception.

I had met with them the week before and while showing them pictures of my previous setup, they inquired about the lighting I had used, which led to them adding lighting to the room. This is the easiest way to make a big impact in the look of the room without spending hours decorating. 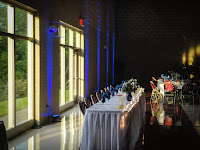 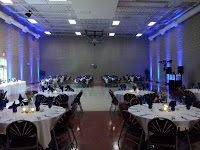 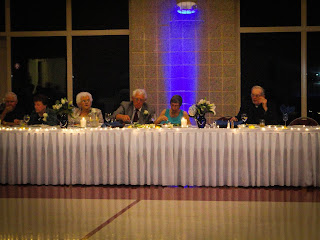 I'm not exactly sure of their ages, but I'd guess late 70's to early 80's. This makes playing the right music challenging for some and impossible for most. Only an experienced DJ knows how to get the balance right. With their grandchildren, children, brothers, sisters and friends, the ages were all over. 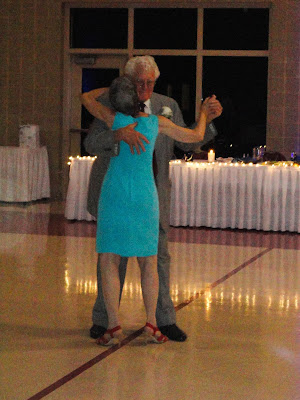 They weren't concerned with picking specific songs and left that to me.  Their first dance was Doris Day - Cheek to Cheek, which they told me was perfect.

Shortly after their first dance, they had a little family tradition that took place. A 250lb ball and chain was locked to the groom's leg and the key given to the bride. They then had to sit back to back and answer questions (similar to the newlywed game) until the end when she unlocked him. 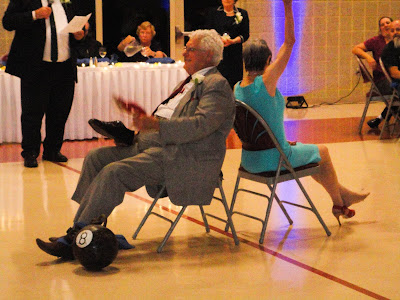 That ball is cast iron and weighs nearly 250lbs!

Guests enjoyed the music as the mix progressed from old to new, until the end, when most of the grandchildren were the ones dancing.

The reception took place at St. Agnes (in their hall behind the church) in Fowlerville. It is very clean and with a little lighting and decor, can be a very nice reception location. The block wall and height of the room do contribute a slight echo, but that shouldn't detract from the appeal of this location. The contact for the hall is Tonya Spisz (517-223-8684) and their website is:
http://www.stagnesfowlerville.parishesonline.com/scripts/HostedSites/org.asp?p=22&ID=4447

I highly recommend checking them out as a potential reception location. Tonya is excellent at assisting clients with their needs. The room can accommodate about 275 people and the pricing is among the best in the county.

The caterer that they use is Gerard's Catering. I've worked with them on several occasions as they also do the Opera House in Howell. Chef Joe created an excellent menu for the Swains and was possibly one of the best meals I've had from this caterer. 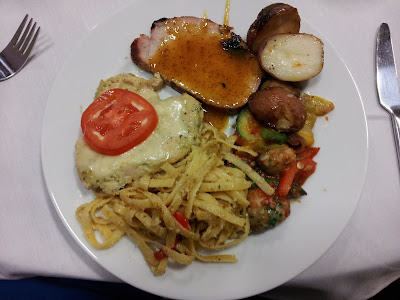 I don't know all the names for each of these, so excuse my poor descriptions. The chicken had a basil garlic seasoning with fresh mozzarella and a roma tomato slice baked on top.  The fettuccini had olive oil, garlic, parmesan cheese and shaved red pepper on it; and the vegetables were a mix of squash, mushrooms and asparagus with tomatoes baked on top. Seasoned red skin potatoes and a salad were also available. The meat was a carved pork loin with honey mustard glaze.

I highly recommend Gerard's Catering for any event.  There contact email is gerardsfood@sbcglobal.net and their phone number is 517-548-1303.

This past Friday, I had the opportunity to do a "lighting only" gig.  The client had already booked a DJ and photo booth (with another company), but wanted lighting, which I was more than happy to provide.

I thought this would give me some insight into what other local DJs are doing, what they are using and what they charge.  I was shocked at what I found...

I will not name the other company, but I will say that they offer DJ, photography and photo booths in Michigan, Ohio and Florida.  They have about 8 DJs that work for them on a "contract" basis.  Many DJs do this to fill gaps in their schedule as we all have to work to make a living.  I do 3-4 contract events per year, myself (not for this particular company though).

I was shocked to see this... 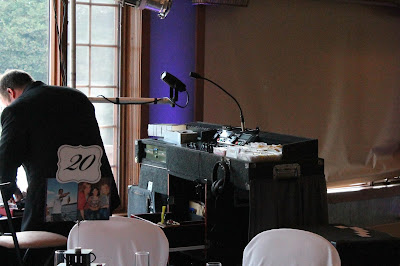 This picture could have easily been taken back in the '90s, but it was taken this past Friday in 2013!  The equipment and extremely small collection of CDs are relics of an era long gone.  Don't get me wrong, CDs are fine for home use, but not for a professional.  At the most, this DJ had no more than 5,000 songs with him.

The DJ Guy carries nearly 100,000 songs with instant access to any one of the 26 million songs from iTunes or Amazon. 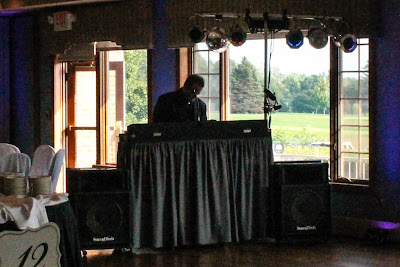 The lighting he uses wasn't any better... par cans with incandescent bulbs and gel colored sheets over them to provide a whopping FOUR colors! (and the only other light was from the spot and disco ball)

The DJ Guy uses all LED lighting.  It's brighter, more vibrant and doesn't burn out (20 year life expectancy).  Our two par cans flood the dance floor with up to 16 colors, in addition to the specialty gobo scanner and whole-room pattern lighting of our other specialty lights.

You'll also notice that his speakers are on the floor.  This is an absolute no-no.  When speakers are left on the ground, you get horrible sound that doesn't reach very far and certainly CANNOT be heard at the other end of the room.  This is a problem because announcements, speeches and toasts will not be heard by the guests.

I arrived back at the end of the reception about 20 minutes early for lighting removal and walked in to see if it had ended early.  There were about 5 people dancing so I stood out in the hallway waiting.  I got to hear him speak, which he did very professionally, so there was no problem there, but... the songs he played at the end of the night were all very dated.  I realize that every couple has different music tastes, but having met the (young) couple myself, I don't think these were their choices.

I did ask him what company he was with and the next day, I inquired about a wedding DJ for 6 hours at the same venue.  I first received a automated reply, which stated: "We deliver ALL of our services using a very high minimum standard.  It is our passion, time and experience that puts us above the rest, and we show it time and time again!"

If standards are so high, why isn't the quality of the equipment?  Why is the DJ carrying such a limited selection?  Why are the speakers on the ground?

I was dying to know what they charge for an event and finally a few hours later, I got my answer - sort of.

The email said they had my fictitious wedding date available and that they would like to speak to me about the date (though I had already provided everything needed for a proper quote.  At the very bottom in small print was a link to pricing...

I couldn't believe it.  For that same amount you could get our Gold Package, which not only includes a FAR better DJ, sound system, music selection and lighting; but also two additional services of your choice!  (up lighting, ceremony sound, monogram projection or slide show).

This particular company had a very nice website, which other than my own, is rare.  Having done web design in the past, I know the importance of a good, easy to navigate site.  A good website isn't everything though and that's something this other company needs to learn.

As the owner of The DJ Guy, I GUARANTEE that you will have the absolute best in sound, music selection, lighting and professional looking setup; at the best prices.

Call us today to book your "once in a lifetime" event!
Posted by The DJ Guy at 2:56 PM No comments: